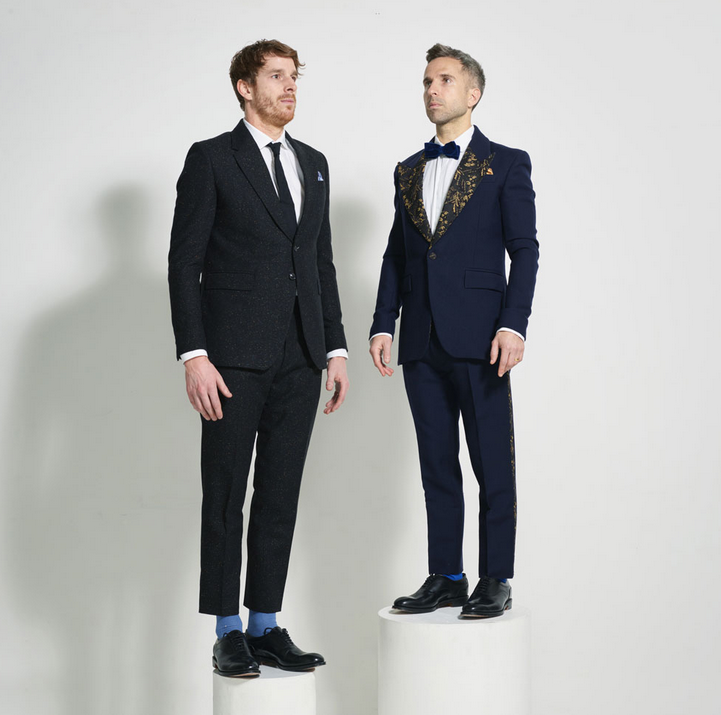 An English pop rock band formed in Indianapolis, The Hoosiers consist of members Irwin Sparkes (lead vocals, lead guitar) and Alan Sharland (drums, percussion, vocals). Their first single “Worried About Ray” reached number five on the UK Singles Chart in July 2007. In October 2007, they released their debut album “The Trick To Life” which reached number one in the album charts. The band released their second top ten album “The Illusion of Safety” on 16 August 2010 and was preceded by the lead single “Choices” which was released on 1 August 2010, it reached the UK Top 20.

On 17 September 2013, the Hoosiers sent an email out to their fans announcing the planned release of their new album The News from Nowhere. The news was accompanied by the release of the first single from this album, “Somewhere in the Distance”, a few weeks later. The band asked fans to pre-order the album. They also gave fans the chance to appear in their “Somewhere in the Distance” video and visit the recording studio.

We’re not a big record label with lots of money, though, so need to pay for the recording, manufacturing, adverts, videos, touring, promotion – all the stuff a label usually does – ourselves.

The album was released on 14 April 2014 under the record label ‘Crab Race’ and was made available on iTunes, Google Play, as well as streaming services such as Spotify. Shortly after the release of the album the band embarked on a UK wide tour in the summer of 2014. This tour would be their last with founding bassist Martin Skarendahl who left the band amicably to pursue new projects.

After the departure of Skarendahl, the band began work on their fourth studio album titled The Secret Service. Like News from Nowhere, the band asked fans to pre-order the album and offered a similar incentive system to help with the production of new music. On 9 October 2015, the album was released, preceded by the EPs The Wheels Fell Off and Up to No Good. The band followed up the album with two live albums; one with recordings taken from a performance at the London Islington Academy from the ‘Tour from Nowhere’ in May 2014, and the other was titled Acoustic Songs in a Church which included 12 tracks from across the band’s four albums to date, each song recorded in one take on a single day in February 2014. As both albums were recorded in 2014 before Martin’s departure, they are the last albums to feature the full line-up of the Hoosiers to date.

After finishing their tour in 2016, it was announced that Swallow would be leaving the band.

In 2021 The Hoosiers teamed up with former Britain’s Got Talent contestants and YouTubers Woody & Kleiny, to record a tie-in record to the Euro 2020 Football Championship called “Route 66”. Based on an old song called “PC Wilson”, the football song is a charity record with proceeds from the single going to the charity CALM (Campaign Against Living Miserably), while the video features appearances from Naughty Boy, The Wealdstone Raider and indie band Two Weeks in Nashville. “Route 66” charted on the Official Singles Sales Chart Top 100 at number one on the 18 June 2021, beating Will Mellor’s charity cover of “Vindaloo” (recorded as Together For England with celebrities like Keith Lemon, Danny Dyer and Paddy McGuinness) which charted at number three, however neither record made the streaming chart or the Official UK Top 40.

Somerstock 2022 will take place at the Somerton Recreation Ground on Saturday 9th July 2022.

Festival gives back to the community
Scroll to top